Umbrella Academy – That Was Interesting 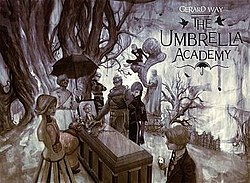 (The Umbrella Academy image from Wikipedia)[https://en.wikipedia.org/wiki/The_Umbrella_Academy]

The good thing about the streaming service content wars is a lot of shows are getting made that would not ever see the light of day ten years ago. Not even no HBO or Showtime. And being a comic book and Science Fiction fan this is like heaven to me. So of course I had to binge The Umbrella Academy in three days. So let me start of saying that I really really liked the series. The take on a super hero team that is raised for children to defend humanity and the trauma that must face as they grow into adulthood is very interesting. Even though we are only giving a glimpse into events that happened in their past we see enough to understand why the team is so damaged. I have thoughts though. Maybe even questions.